Skip to main content and our Accessibility Statement may be found in the footer of our website.
Back To Orthopedic Stories
{{CTAButtonText}} 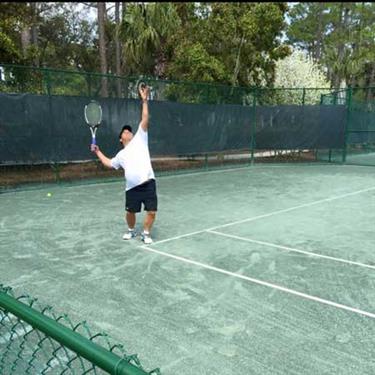 By the way Robert “Moose” Rini serves a tennis ball, you would never know that his rotator cuff was torn in three places just two years ago. “My tennis serve is harder and faster than it’s ever been,” says Moose. “I can throw a football, hit a punching bag and play racquetball which is an all shoulder sport.”

Two years ago, Moose was snowboarding at Beech Mountain in North Carolina. He hit an edge while coming down the hill and slammed down on the mountain on his side. “I had previous injuries that I wasn’t aware of and coupled with this one, it was bad enough to make me realize that I needed to see someone,” says Moose.

Moose went to see Dr. Douglas Scott, orthopedic surgeon on the medical staff at Hilton Head Hospital, for his torn rotator cuff. “What caught my attention and impressed me the most is that Dr. Scott specializes in shoulders,” says Moose. He went ahead with the surgery and while under Dr. Scott found out that there wasn’t one tear but three. “I was amazed. I went home from surgery feeling no worse than I did beforehand,” he says. “Once my pain block wore off, I didn’t need any pain medication until a few days later.”

Rehab began the following week and continued for six weeks. “It’s so important to follow each step they give you. You have to listen and wear your brace,” says Moose. “As a result of that, I’m back 110%.” Moose and his wife, Lynsey, are dedicated athletes and he feels like this has made him a stronger competitor, “I crank on the racquetball as hard as I can. I have no pain and no arthritis.”

Moose is very grateful to Dr. Scott for getting him back to health. “I’ve referred my friends to him and they’ve had the same response and experience,” says Moose. “I’m such a big fan of his. My results came out just the way he said they would!”