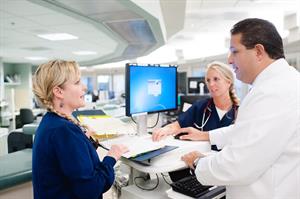 Lyndie Crawford’s daughter brought her into the emergency room at Hilton Head Hospital with what they thought was a terrible case of the flu.

“I felt tired for about a week and I started having trouble breathing,” Lyndie says. “I had no fever or anything else like that. I should’ve paid more attention to my loss of appetite. That should’ve been the big red flag.”

Lyndie has a hazy memory of what transpired immediately after she entered the hospital doors.

“I remember going into the ER and hearing my doctor’s voice, and I remember a few questions being shot at me,” she says. “There are many parts of the visit that I forget.”

While she was being examined, Lyndie experienced a pulmonary embolism as the result of a coronary blockage. She eventually had a heart stent put in and spent the next 10 days in the intensive care unit. Lyndie’s three children waited patiently by her bedside

“When I was still in the hospital, there was some question as to how successful and independent I’d be,” she says. “I have no doubt their support was a big help. I basically had to learn to walk again because I was so weak. I lost 20 pounds.”

Given the uncertainty of her situation, Lyndie never would have guessed how successful her recovery would be.

“I was amazed by how well I’d felt after the surgery,” she says. “I’ve been really fortunate never had anything like this. I didn’t think I’d be doing so well, both mentally and physically.”

A retired schoolteacher, Lyndie has returned to her part-time job at the local children’s museum. She has shaken up her exercise routine by riding her bike along the beach. Not all patients of Hilton Head Hospital have loved ones nearby, so the special care and attention shown by the nursing staff is critical.

“Everybody’s really sweet, and they’re like family,” Lyndie says. “If I had a question and called, I felt a great connection. The community is very aware of the hospital and willing to help support in any way they can to make sure it keeps that good reputation.”