As Tania Griffith prepared for the birth of her third child last year she took the time and effort to do research on the hospitals in town. Tania experienced complications during her first two pregnancies and knew she would face them again with her third. She ultimately chose the Women’s Pavilion at Coastal Carolina Hospital because it proved to have more to offer her and her family’s new arrival.

“I was a high risk pregnancy. I suffer from Hyperemesis, a complication where you can’t keep food or liquids down. I had to get in-home care with an IV drip for the whole pregnancy in order to stay hydrated,” says Tania. “The Coastal Carolina staff was great. They identified what was making me sick and they knew how to treat it. I started with medication and when that wasn’t working they referred me to home care which was absolutely the best thing for me.”

Tania and her husband toured the Women’s Pavilion and at the end she says she was ready to have the baby, “I felt very comfortable after our tour. It was clean and everyone was warm and welcoming. I was ready to have my baby right then and there.” 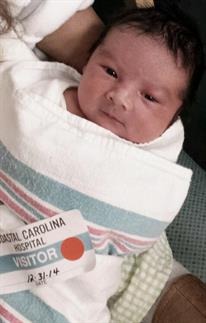 Because of Tania’s complications, the doctors induced her a few weeks early and her son Christopher was welcomed into the world. “They took really good care of me and my child. They were a godsend,” she says. “The delivery nurse that was with me was amazing. I couldn’t believe how on-point she was and she did things for me that I would never have thought I needed. She went above and beyond my expectations.”

Tania and her husband have taken to their friends to spread the word about Coastal Carolina Hospital and its supportive environment. “When our best friends told us they were pregnant, the first thing we did was tell them to go to the Women’s Pavilion at Coastal Carolina.”

“My world became complete when they handed me Christopher,” says Tania. “We recommend Coastal Carolina Hospital to everyone we encounter. It is so worth it. You won’t regret it!”