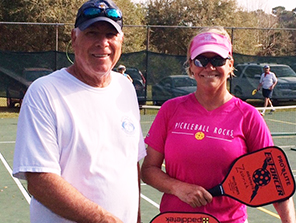 Lynne and James Zachrich are athletes and the epitome of active. They look at youth as a state of mind and not a time period in your life. Their current sport and activity of choice is Pickleball, which is similar to tennis with smaller courts, paddles and a ball similar to one you would find playing Whiffleball. They play five days a week and sometimes twice a day when one of them doesn’t have a conflicting tennis match or fishing tournament.

You would never know that either of them has undergone major surgeries due to sports-related injuries but between them they have two total knee replacements and shattered ankle. Through the years the Zachriches have built a relationship and given the trust of their health to Dr. Nicholas Mihelic, orthopedic surgeon at Hilton Head Hospital. 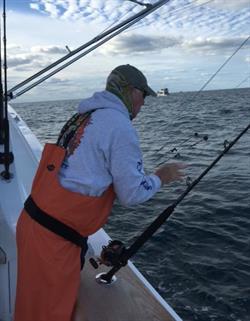 James, also known as “Jamar” or “Jamebo,” has spent his life on and in the water. In the summer of 2011 he slipped while fishing on his boat and his right knee bent backwards. James went to Dr. Mihelic. “It was an easy surgery,” says James. “They got me up and walking the same day.” James was riding his bike a few weeks after surgery, “My knee feels great. I’m able to do and play everything like nothing happened.”

In 2013, James was fishing in a tournament when his left knee became swollen like a balloon. He once again called Dr. Mihelic and learned that his left knee had worn down to bone on bone. After tournament season ended he had his second full knee replacement. “When Dr. Mihelic didn’t have surgery he would come to the hospital and check on me,” says James. “He was spot on with everything and is very conscientious of his patients.”

On Friday the 13th of June, 2014 Lynne took a hard fall diving for a ball while playing tennis. “My brain said ‘you can do it’ but my body said ‘nope,’” says Lynne. When she returned home with an incredibly swollen right ankle James called Dr. Mihelic. A week later and after the swelling went down, Lynne had surgery which included a 5 inch metal plate and 11 screws in her ankle. “Without the surgery I could have had permanent arthritis,” says Lynne. “Now I have no pain whatsoever and a scar that’s barely noticeable. No pain, no problem.”

Dr. Mihelic and his staff have become like family to the Zachriches, “We recently took them a cooler of fresh caught fish,” says Lynne. “Trigger fish is Dr. Mihelic’s favorite.” The quality of care that Dr. Mihelic showed the Zachriches is why they continue to go back, “if we get injured, we go to Mihelic because he will fix you.” 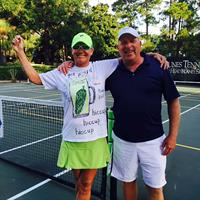 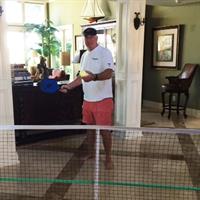 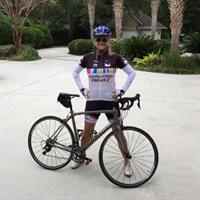