The day started like any other day for Jane Thompson. Jane works and goes to school part-time for medical assisting. She was at work when she noticed that something was wrong with her body. The signs of physical distress started with sweating, fatigue and a headache. Jane’s sweating became profuse, nausea kicked in and her arm went numb. She knew she needed to get help. 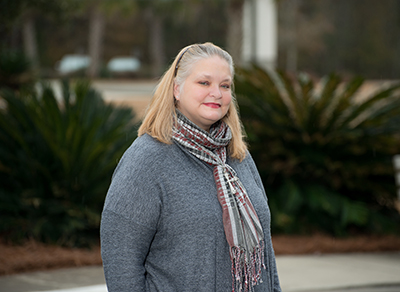 Jane drove herself to the Coastal Carolina Hospital Emergency Department. When she got to the ER parking lot she started to have chest pains. “I think I’m having a heart attack,” was the first thing Jane said when she got inside the ER. “I literally whispered it. Those were the magic words. Within minutes I was in the back and they were working on me,” says Jane.

Dr. John Cacace, emergency medicine specialist, and the ER staff got Jane on oxygen, gave her an aspirin and starting running tests on her heart. “The entire time I was there the doctors, the nurses, the technicians, the girls in radiology, everyone talked me through it. I cannot say enough about the staff,” says Jane.

All signs and symptoms pointed to a heart attack but Jane’s stress and heart tests came back fine. One of her nurses, Laura, mentioned that she had gone through a similar incident a few months earlier and that it wasn’t a heart attack. It was a thyroid issue. The doctors tested Jane’s thyroid and discovered that her daily medication caused hyperthyroidism, which can have symptoms similar to a heart attack. “Laura is magic. She put herself in my shoes,” says Jane.  “She used her own situation and experience to help me.”

Prior to her recent visit, Jane had solemn memories of Coastal Carolina Hospital. “The last time I was at the hospital was in 2011 when my husband passed away,” says Jane. She explains that every time she drove by Coastal she would only remember that this was the last place she saw her husband. After coming here for her own treatment, Jane experienced care that somewhat overshadows what she originally felt. “I was so impressed with all of the nurses and all of the doctors,” says Jane. “Not just for their compassion for me but their skill set. I was so impressed.”

Jane was so moved by her experience in the Coastal Carolina Hospital Emergency Department that she wants to pursue a career related to emergency services. “I would love to work in the ER with patient registration. Now I know what it’s like to be in that position and I want to be on the compassionate side of it,” says Jane.