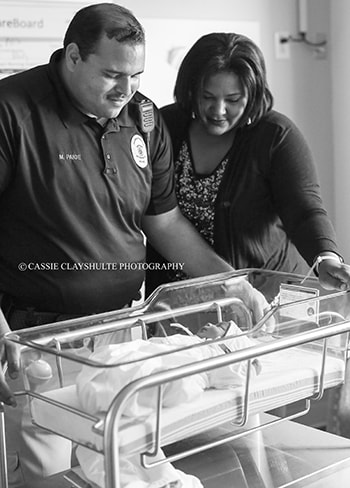 Sometimes, like a hurricane, the path to motherhood cannot always be predicted, despite every effort to be as prepared as possible.

Candice Simplis-Paige was 39 weeks pregnant with her third child when she, her mother and two children evacuated Savannah, Ga. to escape Hurricane Irma.

As a corporal with the Savannah-Chatham Metropolitan Police Training Unit, Candice’s husband, Marcus Paige, stayed behind to help with hurricane efforts. “Of course I was nervous, especially leaving my husband behind, but I knew I needed to get my children to a place where we’d all be safe,” says Candice.

After staying in a hotel for four nights in Charlotte, N.C., Candice and her family were returning home when she started feeling minor contractions. As expected, traffic on I-95 was slow moving, but Candice was anxious to get home to deliver her baby. “We didn’t stop for breaks, food or water,” says Candice. As they continued toward Georgia, Candice alerted Marcus to be ready to go to the hospital as soon as she arrived back in Savannah.

Eventually, the gas tank approached empty in Hardeeville, S.C., and the family pulled into Butler’s Service Center. That’s when the increased contractions and major pain began. It was obvious that the baby wasn’t going to wait to get home to join the world!

After filling the tank, Candice’s mother informed the gas station attendant of the situation, and she was directed to Hardeeville Police Department officers who just happened to be there. The police officers quickly called EMS who arrived on the scene. The paramedics’ evaluation indicated that Candice and the baby wouldn’t make it back to Savannah in time for delivery. EMS took Candice to the Women’s Pavilion at Coastal Carolina Hospital. Approximately 10 minutes later, at 5:47 p.m., Baby Presley was born.

Not only couldn’t Presley wait to get back to Savannah to be born, she didn’t wait for her dad to be present for her birth. While Marcus missed Presley’s arrival, his career has taught him that “hardly anything goes according to plan.”

Of the care she received at Coastal Carolina Hospital, Candice says, “I couldn’t have asked for more, especially coming to a facility where I’ve never been and don’t know anyone, but they made me feel very, very comfortable. You can’t really beat that.”

Marcus echoes her sentiments of the medical staff, saying “They really are attentive to patients, especially the youngest ones. I am very appreciative of how nice they’ve been to my wife and how welcoming they’ve been to me.” He continued, “This is probably one of the best medical facilities I’ve ever visited.”

Though things didn’t go as planned, Candice and Presley are happy and healthy, and the family returned to their home in Savannah, which, after Irma, was also safe and sound.